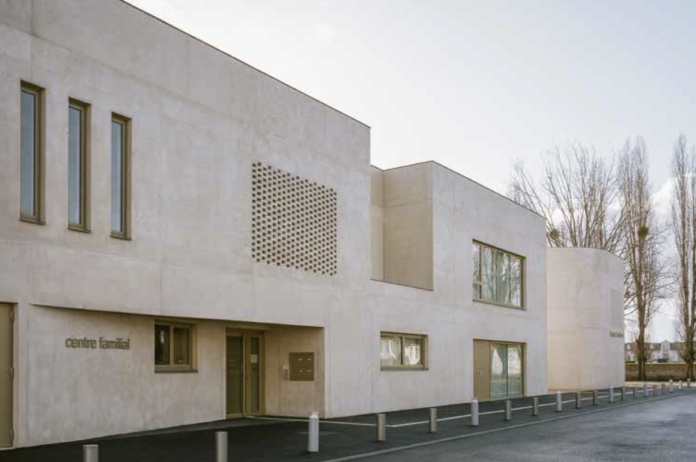 It is about thirty kilometers from Paris, in the quiet town of Pontoise that ateliers o-s architectes just completed the Cordeliers community center and its nursery. Bordered by a vast park in the south and suburban housing in the north, the new ensemble engages in a dialogue with what has always been there. Architecture and context mutually highlight each other, the environment contributes to define the lines of the building, which in return opens up to the scenery. Relatively low and compact, the building is both discrete and rigourous while expressing values of hospitality and openness through interstices and behind-thescenes effects. As you get closer to it, a myriad of juxtaposed volumes gradually shifting from the street are revealed, giving the building its right scale and putting it into perspective in its composite context.

If at first sight it appears to be a parallelepiped volume with a unitary character, the building is more facetious than it looks: a curve marks the entrance to the nursery while a pleat reveals the hall of the community center, mashrabiyas delicately unveil the interiors and a bias draws a convergence line towards the public garden. In reality, the complex shelters two adjoining structures completely autonomous in their operation, welcoming populations and generations who cohabit without seeing each other: the community center on the one hand, with its associative spaces and multipurpose rooms, and the nursery of 45 cradles on the other hand. Behind a protective enclosure, sometimes opaque, sometimes porous, each element of the program is organized around outdoor spaces - three courtyards and a patio. These voids establish a connection between the two entities by the views they weave and the brightness they distribute.

Both structural and plastic element, the self-compacting and coloured in the mass architectural concrete in which the building is designed translates into simple volumes the subtle composition of this building, contemporary and timeless at the same time. Its sand colour enhanced by zinc details and brass joinery puts it in tune with the long collective housing building and the houses that frame the northern tip of the plot. Alternating aplomb and discretion, lightness and massiveness, transparency and opacity, contrast in unity seems to be the key theme of the project.