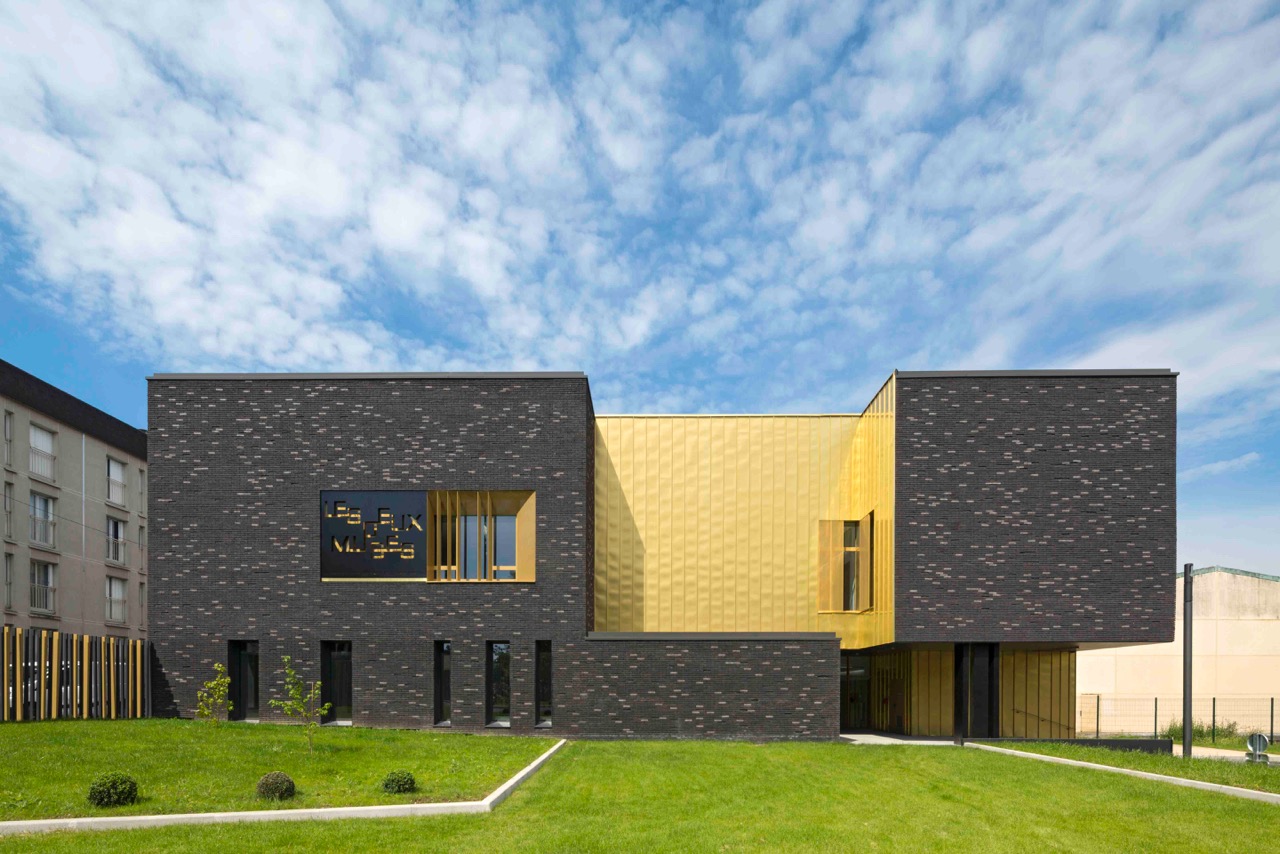 The architects François Defrain and Olivier Souquet have sought to create a landmark in a somewhat loose urban fabric made up of public open spaces and a range of different buildings (suburban terrace housing and blocks of flats dating back to the sixties). The taller building on the West side houses the multipurpose performance hall with a seating capacity for an audience of one hundred spectators. The large forecourt in front of this west wing marks the building main entrance, and links the building up with the neighbourhood and makes it easily accessible to its pupils. The longer but slightly lower East wing houses on two floor levels a number of classrooms, practice rooms, the school’s offices as well as two recording studios.

The building is also very striking from the outside because of the starkly contrasting materials used on the external walls: whereas the top section of the main walls are clad in dense, charcoal grey brickwork, the lower half is covered in warm golden copper alloy cladding (Tecu Gold). The shiny, almost fragile aspect of the copper alloy contrasts with the brickwork which has been densely set with hardly any visible jointing to give it the rough aspect of a dry stone wall. Speckled lines of light coloured brick create random horizontal patterns across the brick wall surfaces whilst the vertical ridge lines behind the copper cladding give a vertical rhythm to the other façades. So, for instance the splayed window openings on the upper part of the building evoke the frame of a harp with steel sun blinds running vertically to look like harp strings.

From the main entrance one penetrates into a central hallway that marks the junction area between the two separate wings of the building. A full height glazed wall bathes the reception area with natural daylight. The sloping acoustic ceiling in white perforated gypsum panels accentuates the reflection of natural daylight. The sweeping horizontal vein patterns of the crown cut American red elm veneer are highlighted across the main reception desk. American red elm also features on the double doors leading into the performance hall but here the busy grain patterns run vertically and contrast with the plain dark grey stoneware flooring. The attention for detail is expressed again in the building’s internal signposting which is made up of icons engraved on blocks of American red elm. The performance hall is equipped with a traditional parquet floor in solid beech laid on flooring sleepers. The dark black acoustic shell at the back of the stage is made in special wood panelling with a natural oak veneer facing that is stained to look like wengé.

All the doors inside the building have laminated American red elm facing as well as the door frames which are set in to give volume and mass. To create rhythm and variety the architects have alternated different shades of white and grey wall coatings between the doorways with full height wood panelling in American red elm crown cut veneer fixed on MDF panels in certain wall sections. The strip lighting runs along the top edges of the walls so as to create a subdued indirect lighting that creates soft shadows on the joinery work and stoneware flooring.

To reach the first floor, which is entirely dedicated to the dance school, visitors take the main staircase. An elegant rail bannister designed by the architect combines solid oak with stainless steel. At the top of the staircase the varnished oak rail bannister continues to run around the wall section and clear glass balustrade that frames the stairwell.The layout of the first floor is similar to the ground floor but the main gallery is slightly narrower than on the ground floor and is bathed in natural daylight from the roof and from the bay windows giving onto to the patio. Again all the doors have laminate facing in American red elm. The larger of the two rooms has a Junkers oak parquet floor with wide strips and an oiled finish. This façade of the first floor is slightly set back from the street which allows one of the dance rooms to give on to a roof terrace.