Olhão is an independent place founded and run by a São Paulo artist based in Barra Funda neighborhood. The goal was to create a space were three functions such as art gallery, atelier and house could not only work together but as well collaborate and achieve new undiscovered interactions between people, their works and art.
The site was an old warehouse in an ex worker’s neighborhood in the center of São Paulo, it had an existing small garden with trees that inspired the idea of building the project around a sequence of patios on two different levels that would create various sensations of light and intimacy.
The patios define and divide all the internal spaces from each other and yet create their own independent one. Overall the 5 patios singularly separate functions and places but all together unify the project under a common sequence and rhythm.

The only room that has a direct interaction with the outside is the gallery, it is separated by the first patio from the atelier of the guest’s artists but still persists the visual contact between the two spaces. The second patio creates an even more net division between the guest’s ateliers and the client’s workspace.
At the entrance a small lateral door connects you to the first floor, the house. Its rooms share a direct visual connection with the ground floor by the two main patios even though it’s filtered by the trees. Three other smaller patios create the right intimacy in the various rooms and work as well as skylight on the ground floor.
The rooftop is not just a huge terrace looking at the city but eventually becomes part of the gallery for the external exhibitions. Overall the project works on a sequence of openings to the sky playing with light, nature and materials. It’s harmony sets on the interaction between the spaces and on its accurate circulation that define the right gradient of privacy and intimacy of each room. 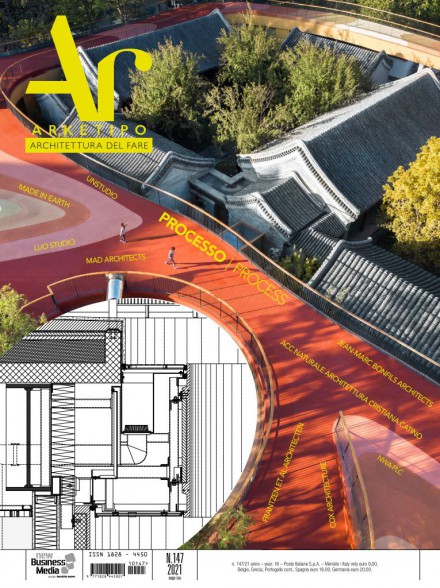