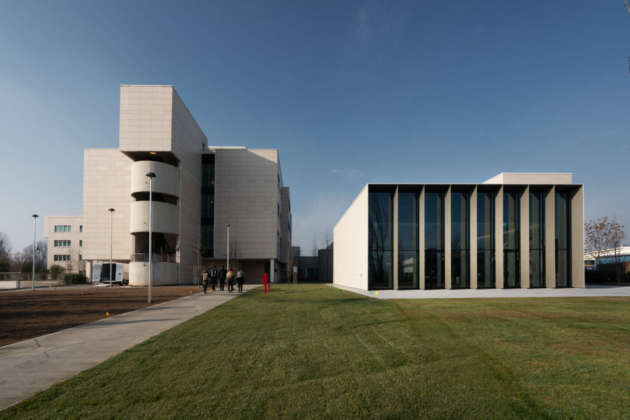 Casalgrande Padana has contributed its advanced technology to yet another advanced large-scale architectural project. The company’s porcelain surfaces offering cutting-edge technical and aesthetic performance have been used in the construction of the new entrance pavilion for the Humanitas Congress Centre, measuring about 600 sqm, in the southernmost building in the Humanitas Clinic in Rozzano, south of Milano. Conceived as an expansion of the hospital pavilion currently housing the Congress Centre, the new building designed by Filippo Taidelli aims to provide independent access from the medical area to the existing congress halls. 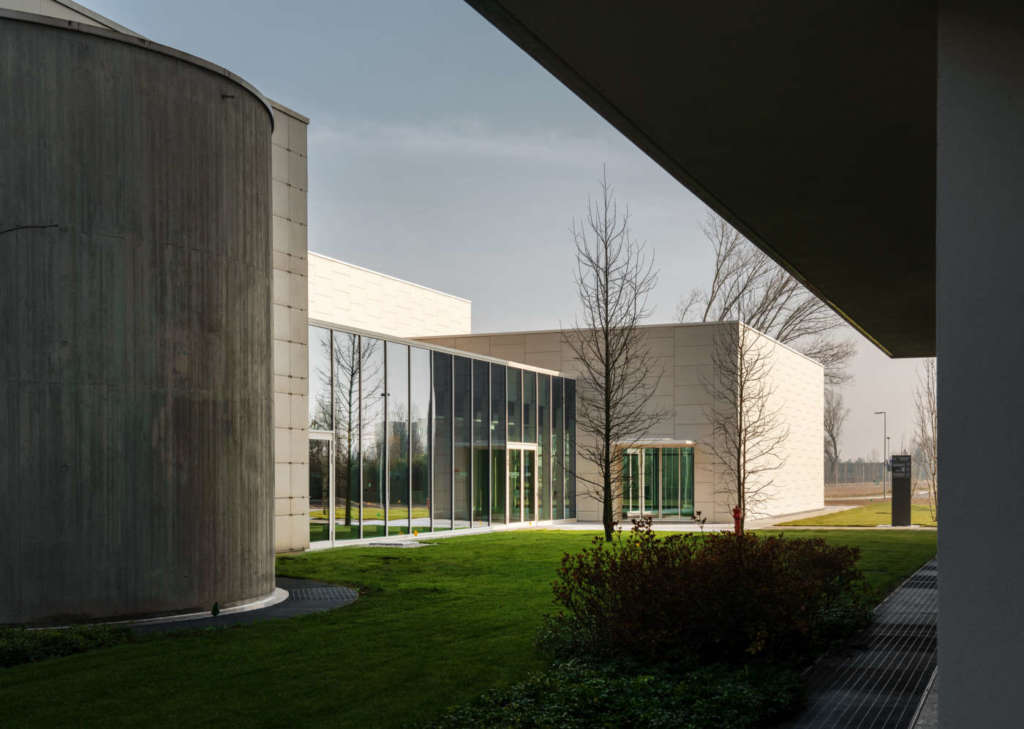 The spirit of the project reconciles the new space’s representative purpose with the formal characteristics of the existing volume. Built on the boundary between the municipalities of Rozzano and Pieve Emanuele, the construction serves as a transitional element between the hospital and the park of the new university campus, where the new classrooms and research laboratories are located. The design of the new entrance to the Congress Centre reinterprets formal elements already present on the site, updating them in the style of the new constructions on the Humanitas University Campus. 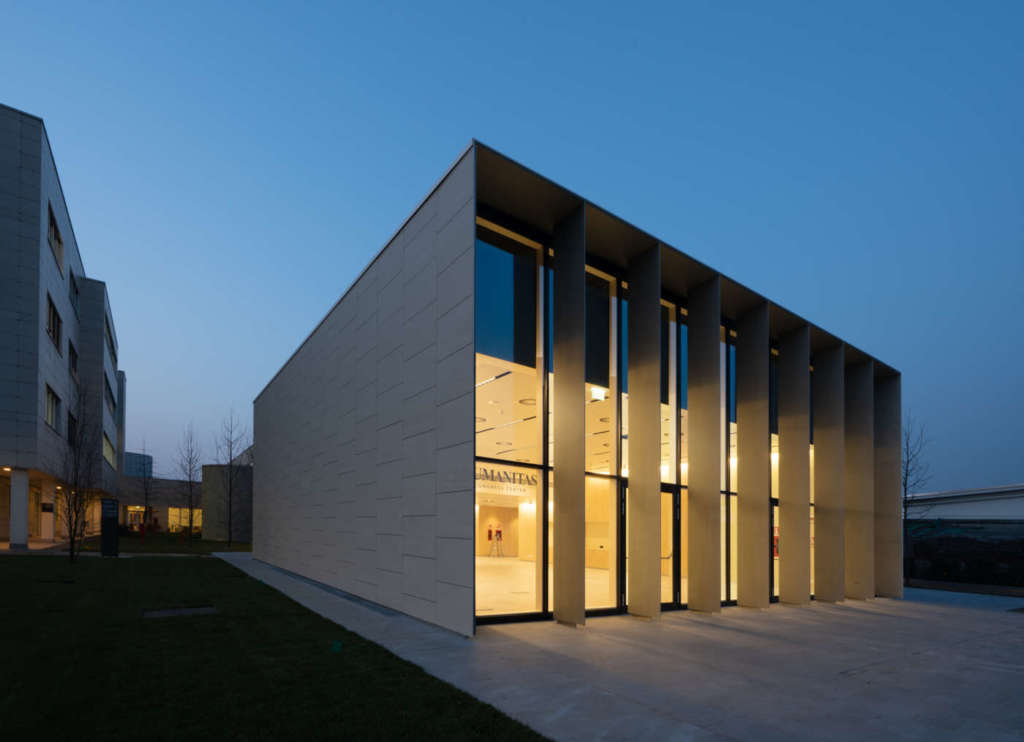 The composition of the volumes is covered with Casalgrande Padana porcelain tiles, containing the light‐box of the glass body connected with the congress halls. The architects chose a 60x120 cm porcelain ventilated façade in the colours most similar to the building already standing on the site, with a natural surface, anchored to a lightweight structure fixed to the wall behind it; between the layers of masonry is an uninterrupted layer of thermal insulation wrapping around the entire building. The laying scheme is modified compared to the existing building, opting for an offset pattern, staggered on the shorter side, as in the pattern covering the buildings on the university campus.
The glass box connected to the hospital pavilion is an ethereal volume ensuring great transparency and visibility from both inside and outside, turning into a lantern when lit up at night. A further interruption in the stone-like volumes is a big window facing southeast, overlooking the nearby university campus park, filtered by giant elements marking the rhythm of the glass façade and helping to shade it. 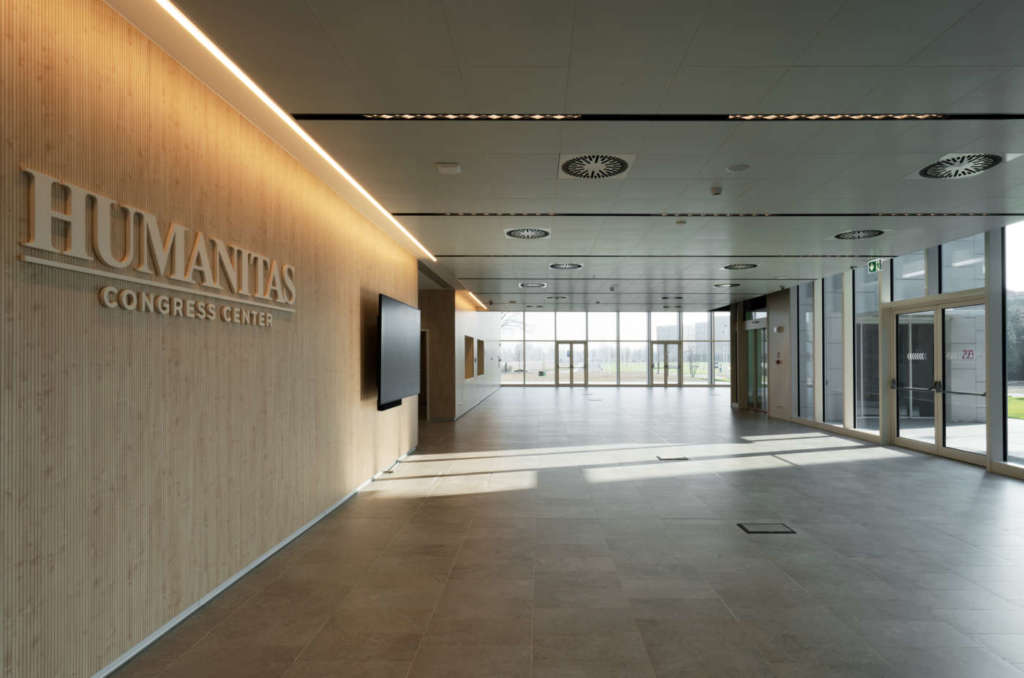 Maximum use of glass surfaces optimises natural light while guaranteeing continuity between inside and outside. Inside, the building is designed to be a flexible space opening onto service areas, a form of distribution which allows it to house a number of different configurations for a multitude of activities: conventions, conferences, presentations or parties, in addition to its principal function as the foyer of the congress halls. Sound-absorbing cladding wraps around the inside walls overlooking the entrance to the building, forming a uniform curtain wall which is only interrupted by the glazed spaces marking the entrances to the service areas, ensuring the great fluidity of the space without compromising its acoustic comfort. A uniform floor of Casalgrande Padana porcelain in neutral hues of stone (Chalon grey) provide the backdrop, continuing like a carpet into the areas outside the building.

The Campus Humanitas University designed by architect Filippo Taidelli of studio FTA is a complex of buildings and gardens. Created to house 1,200 students from 31 different countries, as well as professors and researchers, the campus also includes a 2,000 sqm Simulation Lab, one of the biggest and most technologically advanced facilities of its kind in Europe, high‐tech classrooms, a digital library and a residence. All located only minutes away from the research laboratories directed by Professor Mantovani and the hospital, an integral part of the campus for training the doctors, nurses and physiotherapists of the future. The volumetric composition of the campus picks up on the traditional farmhouse courtyard, reflecting the introverted nature of its volumes harmoniously arranged around the farmyard; the concept is given extreme form by the overlapping of volumes adding dynamism to the complex. The new courtyard is the “piazza” where the students will live, containing the three glassed-in entrances to the buildings.

The formal principle underlying the project is based on a composition of polychrome volumes broken down into three different surface coverings in warm, textured hues, accentuating the dynamic structure of the complex and generating a well-proportioned ratio with the plaza, on a human scale, making the surface of the façade more vibrant in the light.
All the buildings present the same type of Casalgrande Padana 45x90 cm ventilated façade laid over a lightweight structure anchored to the wall behind it; between the masonry layers is a layer of uninterrupted thermal insulation wrapping all around the building. The opaque façades are interrupted by windows with an asymmetrical white intrados and the large windows of the entrance.

Casalgrande Padana ceramic covers a villa in the Pistoia countryside 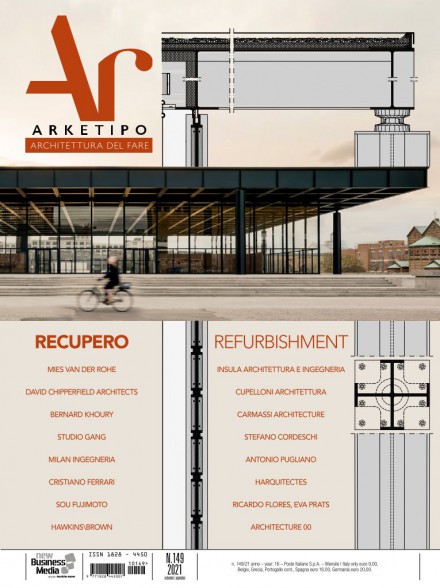