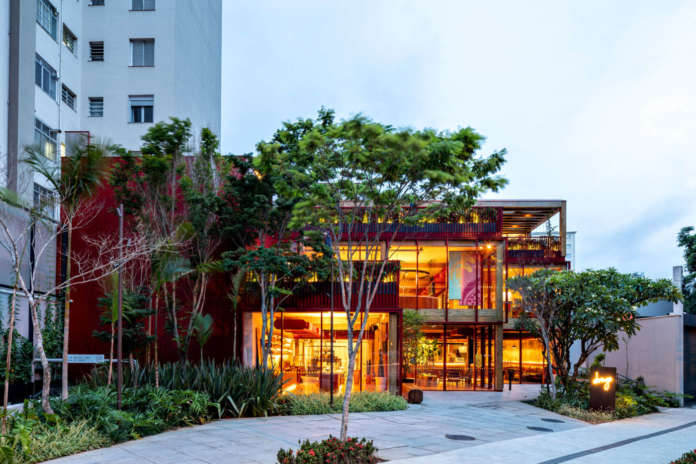 The firm Matheus Farah e Manoel Maia Arquitetura (MFMM) is responsible for the first and tallest wooden building in Brazil, located at Avenida Faria Lima, in São Paulo. Designed to host the concept store of the premium chocolate brand Dengo, the building has four floors and was entirely structured in wood - an unprecedented feat for the Brazilian architecture and construction industry.
The project was built with the engineered wood CLT (Cross Laminated Timber). CLT are certified wood panels that, after factory production, are ready for construction on site. Thus, it is possible to reduce project costs and time duration, avoid waste generation in the assembly process and create cleaner and more sustainable buildings. “The project bets on technology to review current construction parameters, showing how it is possible to innovate, reduce environmental damage and promote a sustainable development for our cities, without letting behind aesthetics and comfort”, says Maia.

Dengo's concept store occupies a 800 sqm plot with 1,500 sqm of building area. The front garden occupies a stretch of the 5 meter-setback, and is connected to the street through a walkway crossing, which expands the sidewalk. The volumetry is composed of hollow wooden cubes that both verticalize the building and convey the idea of permeability and movement; this is possible through some strategic subtractions at different spots on the facade. The exposed wood structure and the vegetation composition contribute to a feeling of comfort and liveliness, and also rescue Dengo's core values of producing in harmony with the environment. Transparencies and openings, as well as earthy tones, natural lighting and ventilation and wooden surfaces accentuate these characteristics. The interior was also designed by the office. The flooring brings back the red ceramic "caquinhos" tradition (broken shards), typical of São Paulo residences from the 1940s and 1950s; they were found in “tile cemeteries” and were used to compose the ambience. Besides paying homage to the city and evoking an affective memory, it also refers to the famous “quebra-quebra” brand product: chocolate boards inside glass niches that are broken into as many pieces as the customer orders.
“We seek to create a space where the rustic, irreverent, authentic and handmade were highlighted, based on a contemporary reinterpretation of the use of natural elements and the very concept of Brazilianness”, claims Matheus Farah.

The architecture sought to recreate a chocolate factory in an attractive and didactic way so it could highlight Dengo's differential: the company controls every stage of the production process, which is also known as the “bean to bar” process. This includes since the production of cocoa beans (chocolate in its purest form) in sustainable farms from southern Bahia, until the making of the chocolate bar. To ensure this care, the project envisaged the installation of original restored machinery from the 1940s on the ground floor to show the refining of the chocolate in loco. The mill is supplied by beans that arrive through transparent ducts and pass through a central atrium, in order to create an enchantment and enrich the public's imagination, expanding its references on the manufacture of chocolate. On the first floor, at Meu Dengo station, customers are able to watch while personalized items are especially and instantly made for them.
First and second floors offer tables and benches to accommodate visitors. The floors also have transparencies and side openings, which contribute to a connection between levels and establish a visual relation from inside to outside. It is also possible to go to the rooftop and enjoy it as a viewpoint of the city. Apart from the foundations made in concrete - as they are underground -, the whole construction was built with slabs, beams and structural walls made of wood, eliminating the use of metallic structures or cement.

Although timber buildings and even skyscrapers have been appearing each time more frequently in countries such as Canada, Austria, Switzerland, Norway, Sweden and Finland, their presence is still incipient in Brazil. The Mjøstårnet, considered the tallest timber building in the world so far, has 18 floors and 85 m high. Among the architects who stand out for their wooden projects, it is possible to mention the Japanese Shigeru Ban and Toyo Ito, the Finnish Alvar Aalto, the American Skidmore, Owings & Merrill (SOM) and the Canadian Michael Green. The choice for this kind of material is an important alternative in civil construction, as the market is responsible for 39% of the total global gases emissions, including carbon dioxide derived from the production of energy destined to the construction industry, according to data from the UN Environment. Unlike steel and concrete, which production generates high levels of emissions (concrete accounts for 11% of global emissions), wood is able to store carbon throughout its useful life, removing it from the atmosphere and contributing to coping with climate change.
The wooden slabs of Dengo's concept store were supplied by Amata and the beams, pillars and assembly by Rewood, references in the engineered wood industry. “The connection between companies involved around the purpose of creating profitable and correct businesses from the social and environmental point of view was fundamental for the first engineered wood building in Brazil, a milestone for the country's construction system”, says Ana Belizário, project and new business manager at Amata.