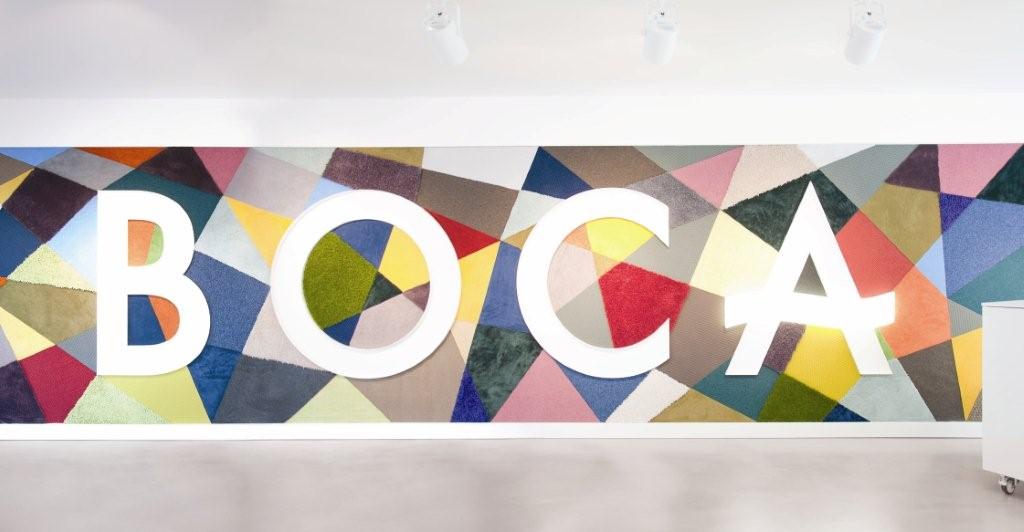 Total white for the new Boca showroom, a company which operates in the high quality cladding sector, located in the city of Prague. Spareness and light were the principal objectives of the restructuring operation, which also involved renewing the floors and internal walls of the former offices, now converted into a showroom. The client wanted a neutral space, with a clean and linear design, which would constitute the perfect background for displaying to best advantage the vast range of materials and colours offered to the client for resurfacing the floor.

To achieve a result which could combine aesthetics and functionality, the solution chosen was Microtopping, the innovative surface from Ideal Work, which as well as raising the formal and architectural level of the space, is discreet enough to allow the room not to "steal the scene" from what is on display. The range offered is presented in a highly original way, inspired by futurism: on each wall a maxi collage has been created of the individual samples, carrying the studio's logo. The samples are arranged in movable and modular trays which can be varied at will. The operation took place in several stages: the main area had previously been divided into various offices with walls which were later demolished. The existing floor was broken up and a new sub-base was created; after five days, Microtopping in smoke grey shade was laid (Colour Pack Smoke). The surface was then treated with a protective coating, thus taking on a natural satin effect.

The work was carried out within the specified timeframe, about eight days, to the great satisfaction of the client, who was able to appreciate the quality and the aesthetic input of Ideal Work's solutions. Attention was paid to every smallest detail of the entire space of about 140 square metres, to heighten the aesthetic effect. The furniture and the complementary fittings were chosen with care: from the Vitra Ad Hoc table to the Artemide Nur lamp and the Wilkhahn Aline chairs, to mention just a few of the design objects present.