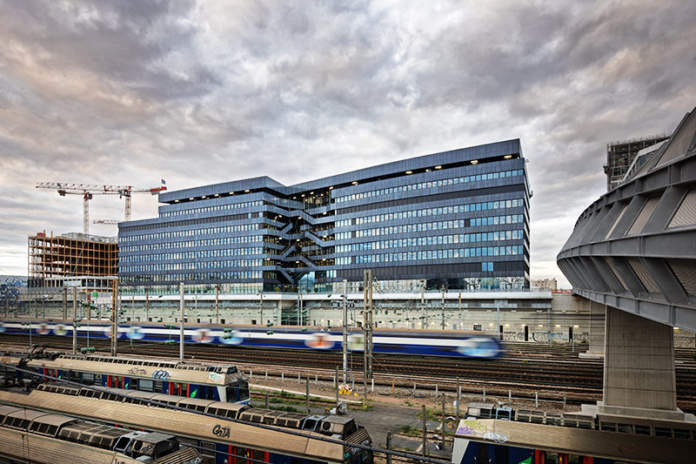 The building is part of the extremely dynamic renewal underway in the Clichy-Batignolles district in Paris, an area characterized in part by the convergence of railways leading to the Saint Lazare train station. Positioned at the edge of the web of train tracks, on the platform partially covering the rail corridors for train storage, the site is inserted between this opening facing the wider landscape and what is becoming a densely built up new urban artery on the other.
The “ribbon” plan offers an open façade in relation with the context of the train tracks, the street and the park. Thus, like the Möbius ribbon, the exterior and interior spaces interlock on all sides of the building, enabling easy and fluid movement and visual continuity from the outside, from the ground floor up to the roof. All the façades have received the same careful attention to their design, ensuring their continuity resembles a continuous, homogeneous and unbroken skin.

The whole building is clad with enameled terra cotta, a reference to the industrial buildings standing along the train tracks. Applied on all the façades, this skin comes alive, its appearance changing according to the direction in which the façades are facing and according to the quality of daylight and what is happening in the sky.
The lobby is laid out with simple materials. Vals stone laid out lengthwise covers the floor and the interior of the staircase like the lining of a garment. The metal structure composed of columns creates a spectacular space with a height of 8 m. These cruciform metal structural elements imbue the space with a subtle vibrancy. The treatment of the base of the columns hides their spring supports. Technical elements also disappear underneath the continuous material surfaces.
The thinking about the domestic ambiance of work spaces led to an alternative design for circulations encouraging friendliness and spontaneity. Thus, exterior and interior spaces have been interwoven across all façades of the building, thereby facilitating the smooth flow from one area to the next and ensuring visual continuity from the outside, form the ground floor up to the roof, where a hanging garden offers an entirely new kind of work space. 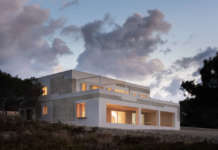 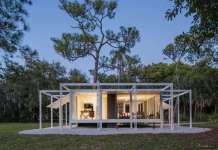