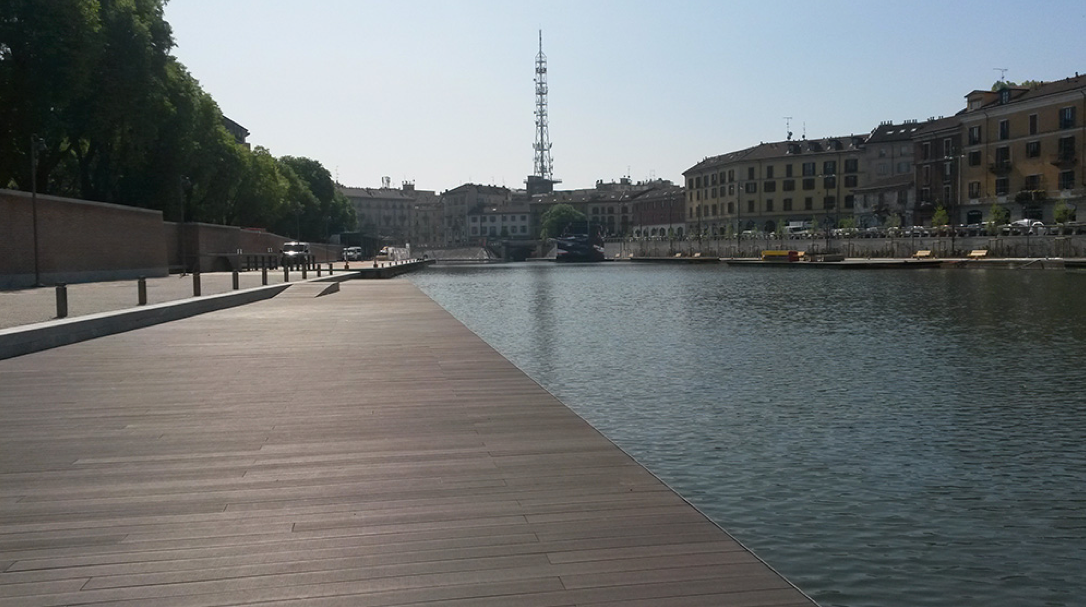 Milan has restored its historic relationship with water. The new Dock has just been inaugurated, following a redevelopment project implemented by the City of Milan for Expo Milano 2015, which the city will continue to enjoy for years to come. The project restored one of Milan’s historic places with investment of almost 20 million euro and the work of about 60 people over an 18 month period. The new Dock totals more than 75,000 square metres, in which a navigable body of water has been created which visitors may tour on foot thanks to the renewal of the banks and creation of new walkways and mooring points for tour boats. The restyling of the ancient port and adjacent spaces was developed by architects Edoardo Guazzoni, Paolo Rizzatto and Sandro Rossi in collaboration with Studio Bodin&Associés.

In detail, the plan involved three macro-projects: first of all, creation of a navigable body of water; secondly, removal of the old market and replacement with a new one; finally, redevelopment of Piazza XXIV Maggio and transformation into a pedestrian zone, changing the traffic routes in the surrounding area. In the context of creation of the body of water, the work involved cleaning of the bed and reconstruction of the banks, except for the part toward Piazza Cantore, where earthen banks were created which slope down toward the water; no railings were built along the banks, in accordance with harbour regulations, but the traditional bollards used in harbours are provided for docking boats. Along the banks of the waterway are two walkways with red brick and serizzo pavement, surrounded by greenery. Two new walkways (one 35 metres long and another 12 metres long) link the two banks.  The second project involved removal of the old market and construction of a new one between Via D’Annunzio, the water and the new Piazza XXIV Maggio. The new retail area includes thirty stalls in a green steel structure. Lastly, the plan also included a third project: Piazza XXIV Maggio, which is now completely closed to traffic thanks to a special pedestrian zone, with 12 plane trees, Led lighting and a pavement based on the historic design of the space, with blocks and cubes of granite.

Carmela Rozza, Councillor for Public Works and Street Furnishings, commented on the reopening of the space at the inauguration:

“The new Dock, which no-one in Milan today has ever known or experienced, will be the most important thing Expo leaves behind for our city. We leave behind us years of neglect and abandonment: one of the city’s best-known and most popular locations has a modern, elegant new face that will be sure to attract not only the people of Milan but all visitors to the city.”