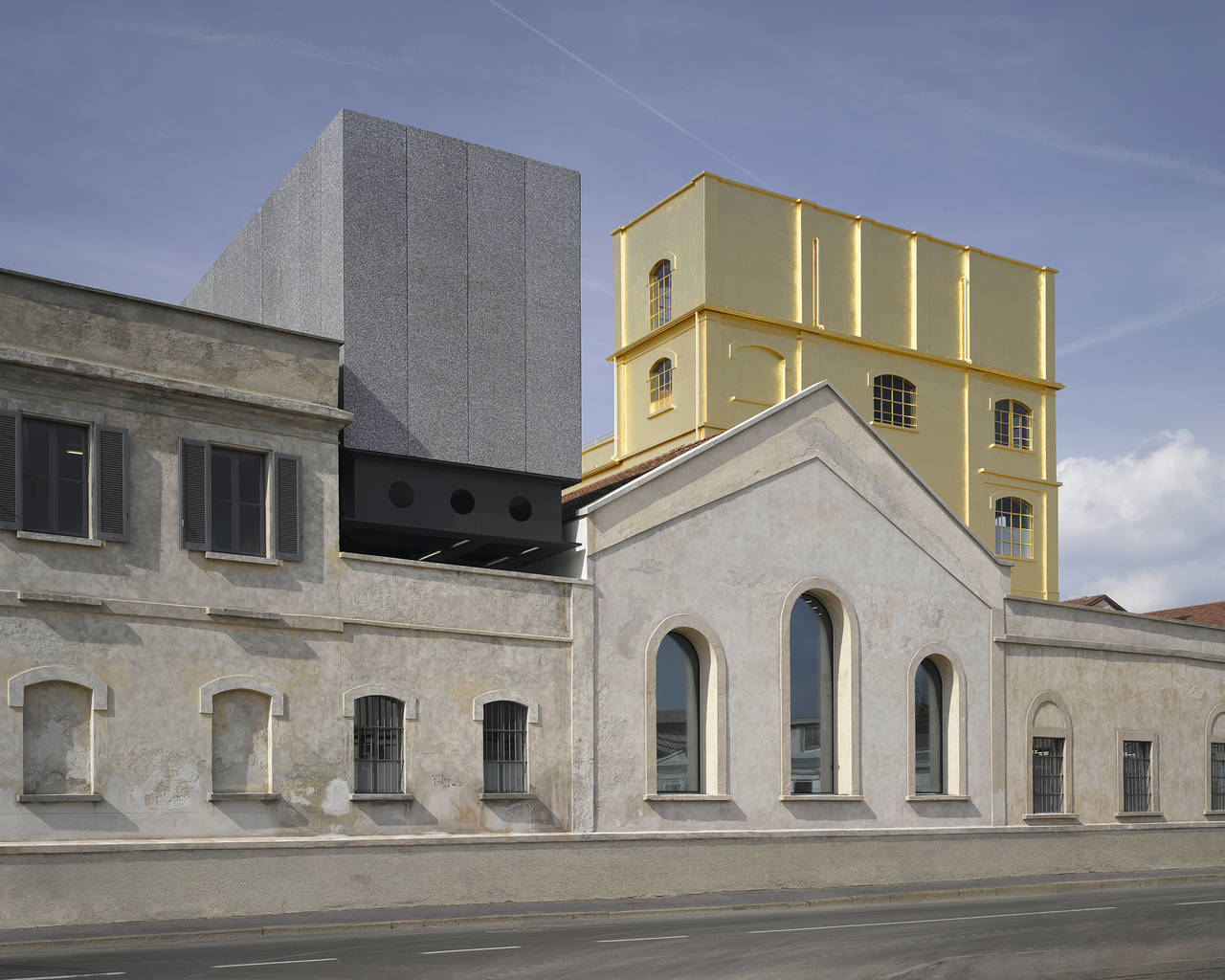 A project combining preservation of a historic structure with a new architectural design, the new Fondazione Prada building in Milan will open to the public on May 9. The project, developed by studio OMA under the direction of Rem Koolhaas, is based on an architectural configuration combining seven existing buildings and three new constructions: the Podium, the Cinema and the Tower, currently undergoing completion. The new permanent headquarters in Largo Isarco (in the south of Milan) covers a total of 19,000 square metres and is the result of conversion of an early twentieth-century distillery to offer the city of Milan a space for contemporary art exhibitions and a variety of different projects in the fields of architecture, film and philosophy. Fondazione Prada has an open structure, the planning of which is the result of discussion among the Foundation’s department curators, coordinated by Astrid Welter, Mario Mainetti and Alessia Salerno, with the Thought Council, a group with a variable composition which originated with Shumon Basar, Nicholas Cullinan and Cédric Libert, joined in May by Elvira Dyangani Ose and Dieter Roelstraete, Presidents Miuccia Prada and Patrizio Bertelli and Artistic and Scientific Superintendent Germano Celant.

The spaces in Milan present three different exhibition projects using the Prada Collection as a tool for study and research: “An Introduction”, “In Part” and “Trittico”. The South Gallery and part of the Deposit host “An Introduction” (May 9 2015 – January 10 2016), an exhibition including more than 70 works. Combining study with love of art, the exhibition explores the curiosity, impulses and aspirations that have helped give form to the collection, leading to the opening of the Foundation. The exhibition itinerary begins with the art of the ’60s, from New Dada to Minimal Art, with works by Walter De Maria, Yves Klein, Piero Manzoni, Donald Judd and Barnett Newman, as well as Pino Pascali and Edward Kienholz. In the centre is a late 15th-century studio, presented as a symbol of the continuity of knowledge and study. A picture gallery includes works by a number of artists including William N. Copley, Lucio Fontana, Mario Schifano, Gerhard Richter and Goshka Macuga. The itinerary concludes with “artists’ vehicles”, including work by Elmgreen & Dragset, Carsten Holler & Rosemarie Trockel, Tobias Rehberger, Gianni Piacentino and Sarah Lucas, immersing the visitor in a reality in which life is intertwined with the artists' contribution and works toward a more extensive horizon, represented by the work of the Foundation.

Set up in the North Gallery, the exhibition “In Part” (May 9 – October 31 2015), curated by Nicholas Cullinan, is housed in one of the former industrial buildings making up the Foundation’s new premises. It explores the idea of the fragment of the body in the sculptures of Lucio Fontana and Pino Pascali, in the representation of ruins in the work of John Baldessari, David Hockney and Francesco Vezzoli, in the use of the photographic close-up, in the construction of the figure, in the paintings of William Copley and Domenico Gnoli, in the deformed portraits of Llyn Foulkes, in the incomplete silhouettes of Yves Klein and, lastly, in the overlapping of figures typical of the work of Francis Picabia. Works by Charles Atlas, Bruce Nauman, Robert Rauschenberg and Richard Serra from international museums and private art collections complete this survey focusing on the tension between the part and the whole.

Lastly, the exhibition “Trittico” (May 9 2015 – January 10 2016) is housed in the Cistern, a building already in existence on the city made up of three tall spaces. The project, curated by the Thought Council, involves rotating presentation of three works from the collection juxtaposed to create formal cross-references and conceptual affinities. The first triptych consists of Case Il (1968) by Eva Hesse, Lost  Love (2000) by Damien Hirst and 1 metro cubo di terra (1967) by Pino Pascali: three works developing minimalist geometries by associating the form of the cube with objects and elements from nature.