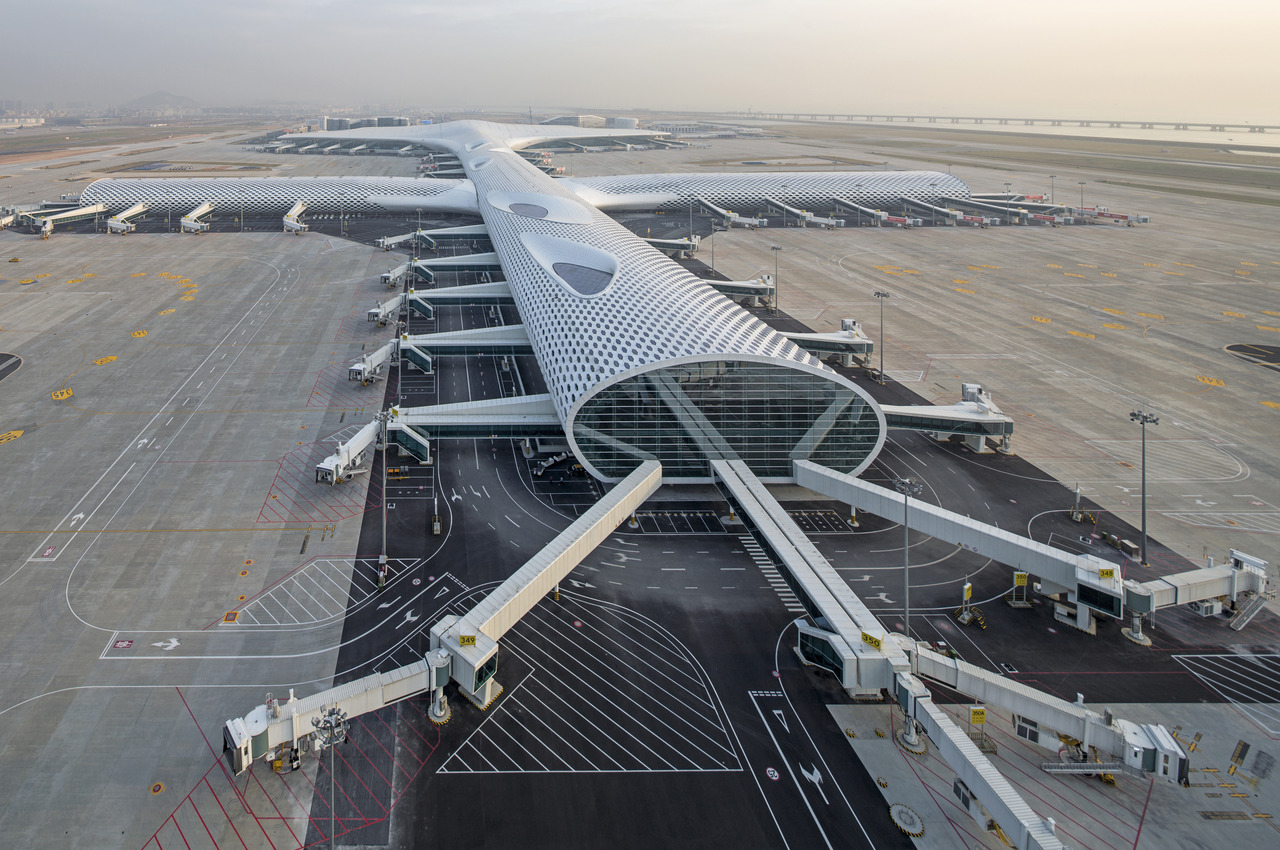 The traveller arriving to and departing from Terminal 3 of the airport of the city of Shenzhen (founded in 1979 within the industrial area of the Pearl River Delta, in Southern China, and in a short period of time it has now become the fourth largest Chinese city) is mesmerised by this organic tunnel modelled by the wind. The building stretches for a length of 1,5 kilometres, covering an area of about 500,00 sq.; its capacity of 24 million passengers per year makes it one of the largest airports in China. Based on a master plan developed by the airport authorities and by their consultants, the floorpan is T-shaped and it articulated over three levels each with independent functions (and with a pretty standard lay-out).

Passengers arrive from the oval road on the south, up to the interconnection centre, a second oval of 245×260 m centre of the connections with buses, taxis, cars and trains. From this space, al level 1, there is the access to the airport’s hall via a bridge; the hall is a double-height volume (306×642 m) with truncated cylindrical columns of white colour and 25 m height to emphasize the lightness of the roof and to remind of the interiors of a cathedral. The concourse starts from this space. The elongated volume (760 m) is the neuralgic centre from where all the different airport functions are connected. The three levels correspond to arrivals, departures (with check-in desks, the info-points of the various companies and the information desks) and services which include food halls, such as restaurants and cafes as well as offices and meeting rooms. The three levels generate double and triple height spaces; the wide spans allow a visual connection between the different floors and allow the passage of natural light through a honey-comb frame, which is an external pattern also repeated in the interior design. Half way through the concourse, the intersection with the cross wing creates an “urban square” with information and food points.

The key feature of the scheme is the honey-comb pattern of the internal and external double skin which wraps the main structure, for a total of 25,000 steel and glass elements, some of which can also be opened. Through the double layer, the skin allows to filter the natural light and to create light effects in the internal spaces which lead the passenger in his route to the gate (which can be up to 1.500 m distant). Two continuous perimeter glazed bands are added to this with their 6 m height providing an incredible view over the runways.

The honey-comb patter, key elements on which the roof is developed thanks to its parameters, has been in parallel and coherently transferred and reproduced also in the design of the interior; the shops, placed on in front of the other, reproduce the base cell in a larger scale and are repeated with different arrangements along the concourse. The furniture elements, places in the internet areas, check-in, security control, gates and passport control follow essential lines and are finished with mirror stainless steel which reflects and multiplies the honey-comb pattern of the internal skin. Along the terminal and the concourse, objects with sculptural shapes, large stylized white trees, house of the air conditioning units while multiplying the design of nature-inspired amorphous shapes such as the baggage collection “islands” and the info-points.

Another aspect which was given particular attention is the lighting design: the objective has been to reach a compromise between pragmatic requirements (to assist the passengers) and to achieve a scenography context (to emphasise the iconic design). The concourse’s lights are been inserted within the double skin so to create, at night, a lantern effect thanks to the predominantly indirect lighting; the artificial lighting follows the variability of the natural one allowing for a gradual transition between day and night. The iconic building has been emphasised placing light cyan lights under the building and at level with the perimeter belts in order to create a fluctuation effect of the “ray” above the laguna.

The Terminal 3 of the Bao’an airport is the fist building of this scale to have been developed using parametric collaborative design techniques (which were in their infancy in 2008 when the design of the airport started). The (not only) geometrical information initially developed by the architects during the concept design, have then been shared and developed by the rest of the design team for the structural calculations, the lighting and technological design and for the industrialised production of the various components. One of the project’s objectives was intact to complete the construction of the terminal just 5 years after design award; hence the choice of developing a parametric design strategy which allowed changes in real-time on all the geometrical parameters of the building.