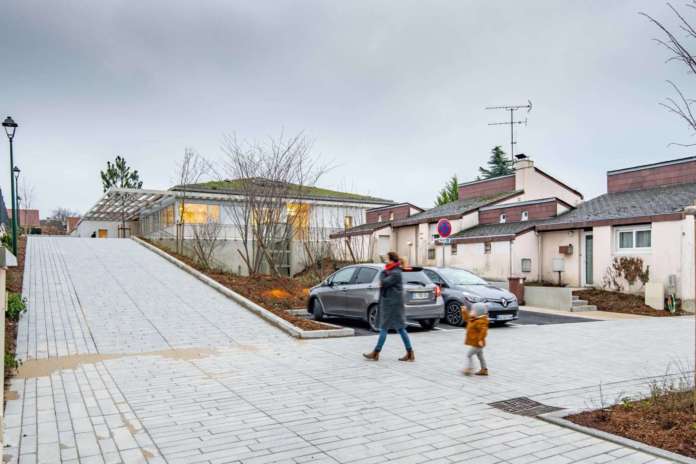 Noisy-le-Roi equips itself with a new facility for early childhood that brings together the four pre-existing structures of the town. Eighty children, six age sections, two hundred and fifty pages of program and attentive residents.
The day-care centre is set up on a single-storey construction in a sloping area, where an extraordinary school made of bricks and wood used to spread out, all made of stairs, ramps, mezzanines, and nooks... The new building is housed under a vast green roof, that we can catch a glimpse of between the pavilions descending from the town hall. It seems to address the agricultural plain, on the other side of the road. Nobody pays attention to it and for the residents, a meadow is even better than a building. 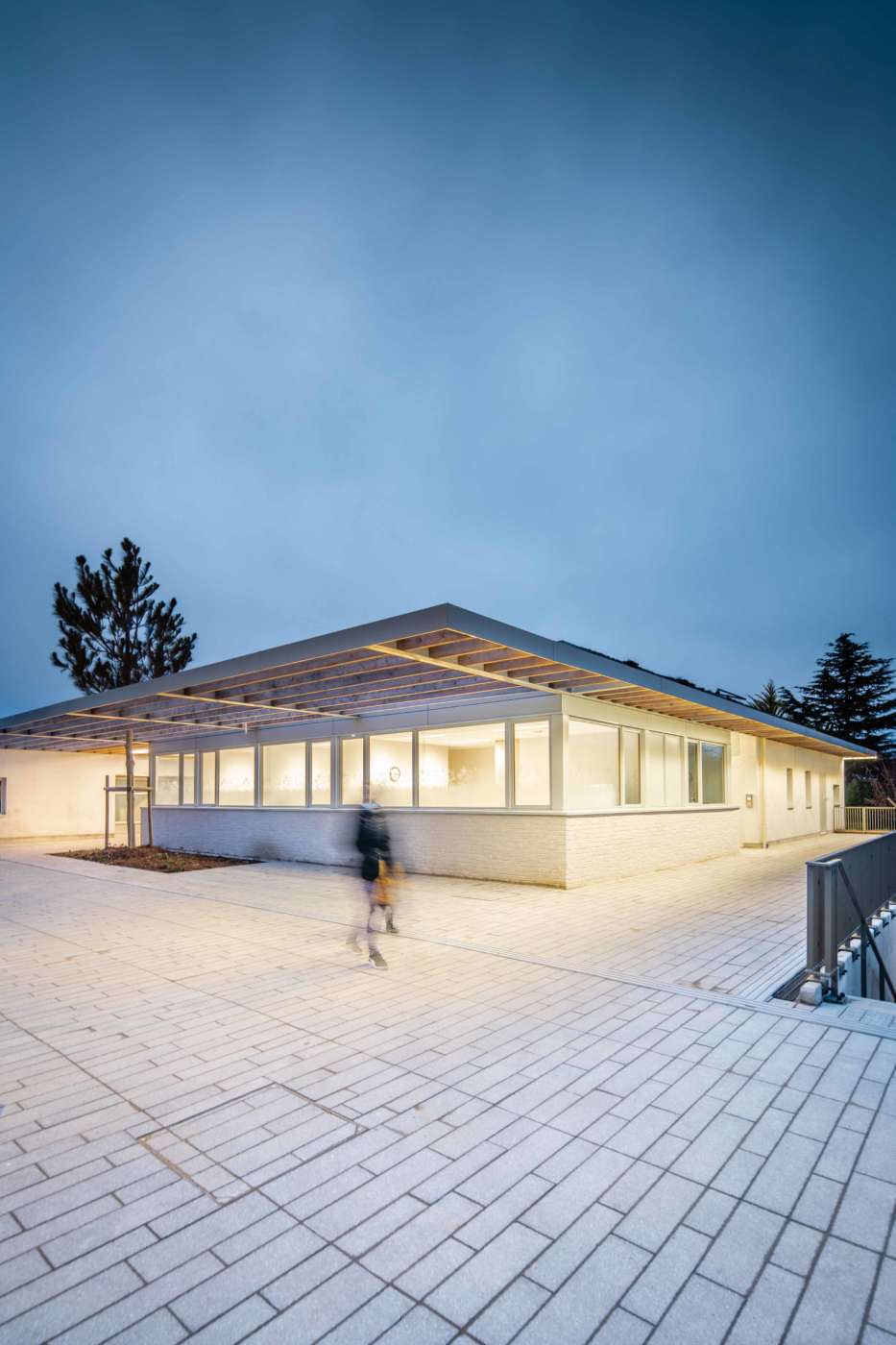 The users, on the other hand, arrive from the road below, the Chemin de l’abreuvoir. They cannot miss the day-care, located at a good distance. Looking a little like a 20th century Case Study house, it is quite discreet, although the layout of the square designed by Chorème allows it to be identified without hesitation. The sensitive cut makes up for the rigorous plan. It slips the project under the green roof, it lights up the space, it sculpts the sound and links the volumes in infinite variations. The daycare is a sophisticated tool with constant adjustments. From the first sketches and virtual photography to the construction, our job has only one objective: to leave the control to two-year-old children.
The plan is composed of a juxtaposition of long solid volumes that house the dormitories and stick slightly out of the vast roof. The awakening rooms, widely open on the facades, occupy the interstices and are extended on the outside in courtyards. The result is a stepped façade with solid glazed surfaces and hollows that are entirely open, allowing the eye to wander under the meadow from one end of the building to the other. The services and offices occupy the lower part of the plan, to the right of the entrance. 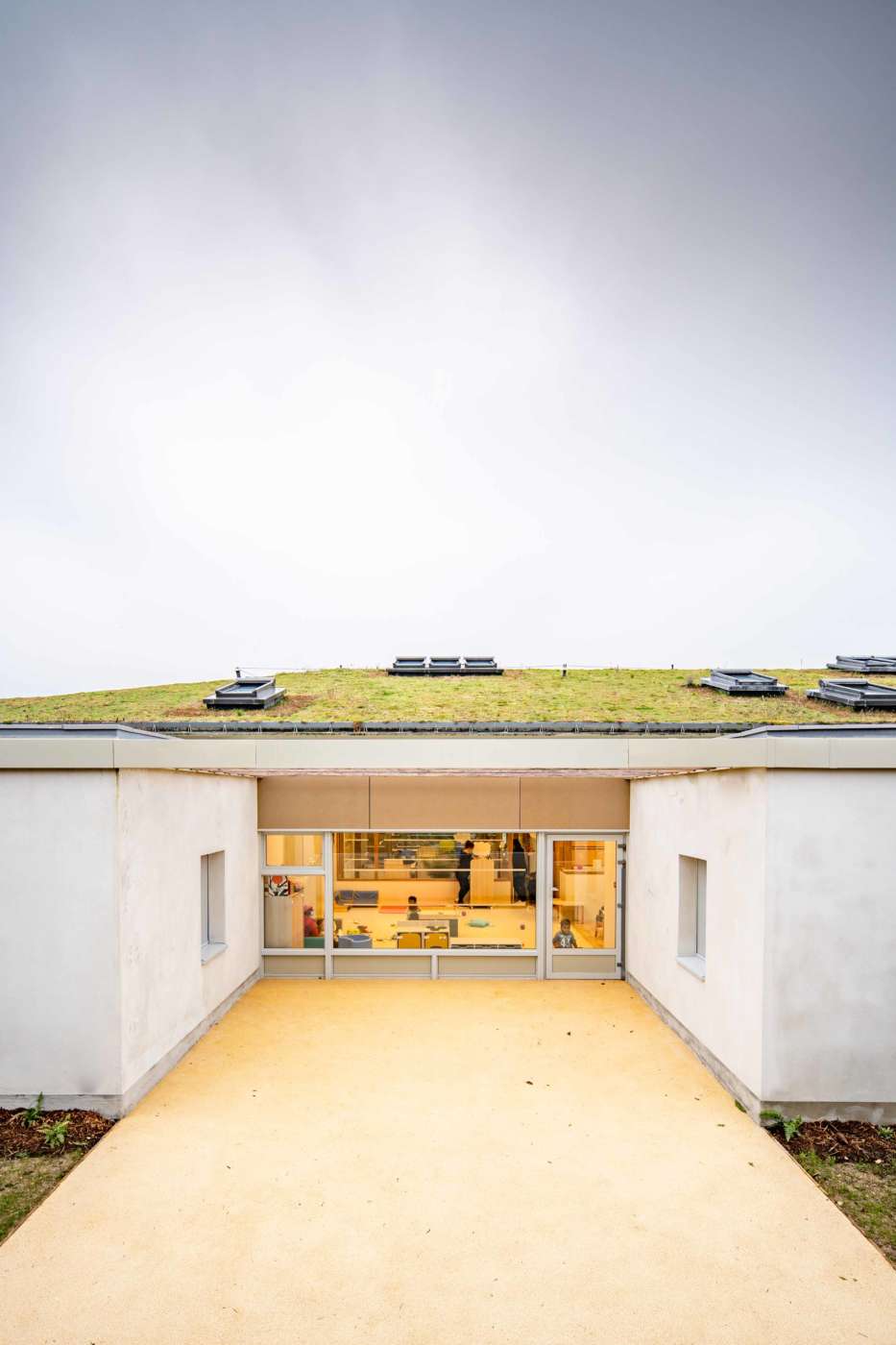 A single central axis successively crosses the solid volumes and their interstices to distribute the sections on either side. The crossing, whose walls are lined with wood, is a bit of a tunnel through the volumes and then it gains in size in front of the awakening rooms in the interstices. The strong contrast could make newborns believe that these spaces are real patios! The inside pergolas, an effective zenithal light and tangerine trees will confuse this innocent public. The long solid volumes between the rooms of awakening are crossed by the public circulation in the center but also by two lateral circuits connecting the age sections and volumes between them. The circulation provides each living unit with quieter sub-spaces on which the most peaceful sub-spaces open like a Russian doll: the dormitories, on the exterior side, and the changing rooms on the circulation side, where one can stand apart for the change of clothes while keeping an eye on the surroundings. The generous volume of the sloping roof is sculpted to characterize the atmosphere of each space. In the alcoves, the pergolas lower the height felt under a colored zenithal light. 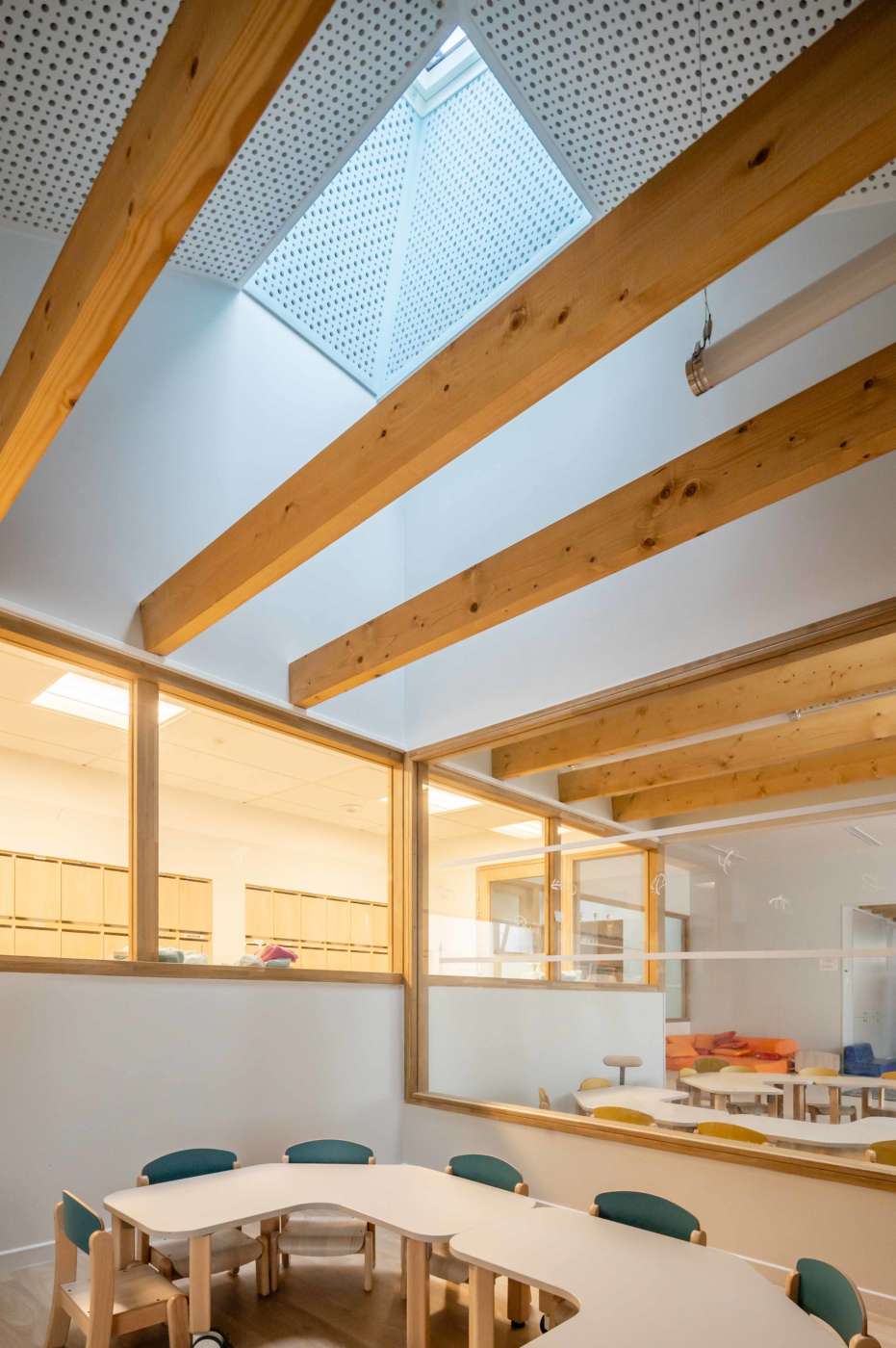 The access is on a hollowed-out corner. Parents pass under the awning that announces the theme so useful of the pergola, they bypass the offices to enter directly in the center of the equipment, between the part dedicated to children and the one dedicated to common services. A sketch, made during the competition phase, shows a car under a reception carport. This image illustrates the starting point of the long debates on the access for disabled people to the platform and more generally on the service and car parking. It is one example among many of the fluctuating constraints and commitments that operate on this project as on any other and that only appear between the lines on the graphic documents. We could also have talked about the hybridization between two local vernacular typologies, quite banal in the end, the pavilion and its rendering and the vast agricultural shed, but we wanted to talk about something more essential. The link between the plan, the section and the very simple, very immediate experience of children opening to the world. How architecture can best reassure, stimulate, let it happen... 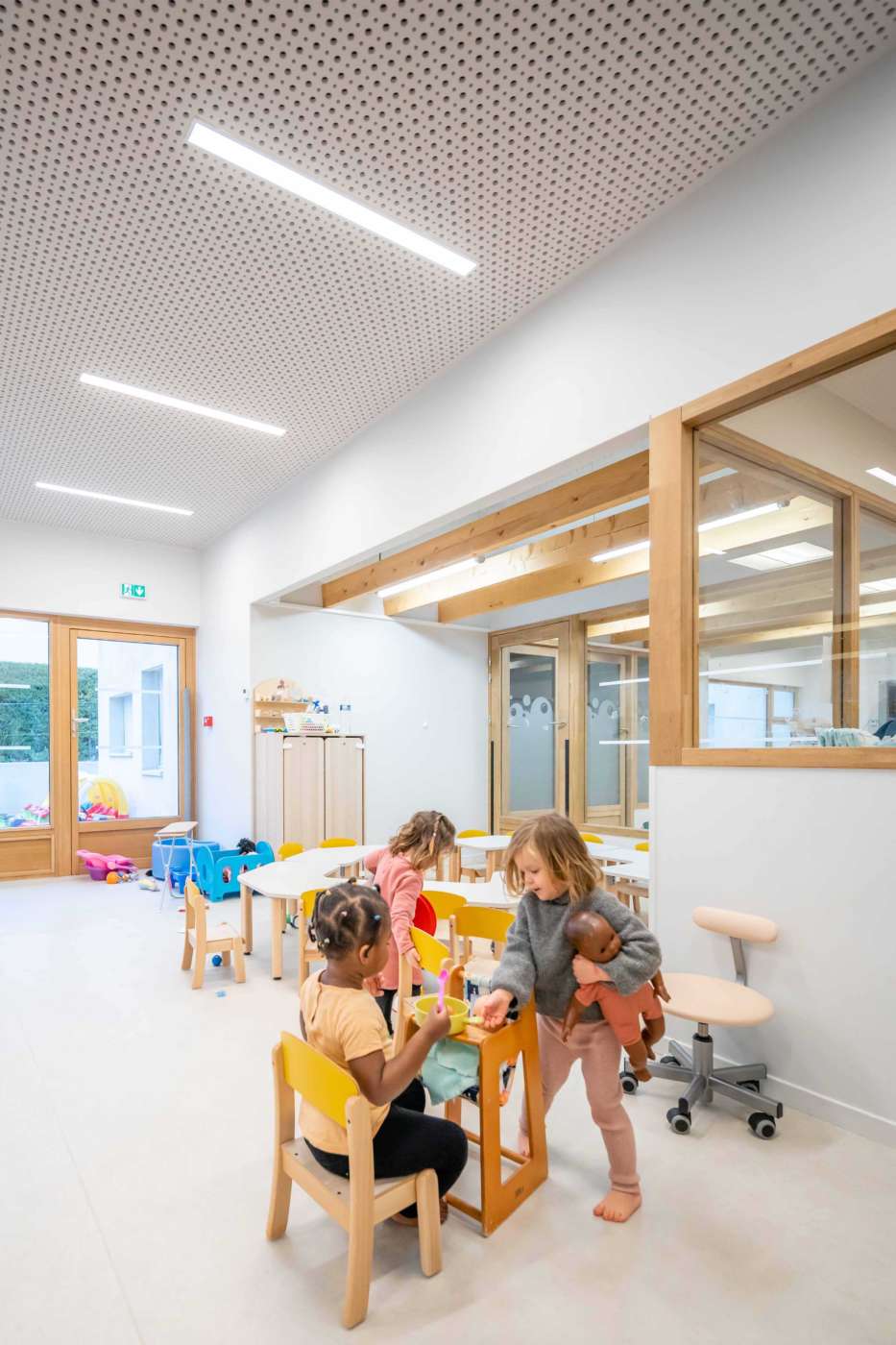 The roof as the main façade

The roof qualifies with a spectacular discretion the insertion of the equipment in its context. The vegetation protects and perpetuates the waterproofing and allows the retention and regulation of rainwater. The thickness of its substrate, supported by a mixed steel-wood structure, allows for a generous initial palette of plants, which will evolve in continuity with the ecosystem of adjacent gardens already present. The roof is also the main tool to characterize the ambiences and comfort inside the single-storey building, according to a bioclimatic design going to the essential. Its frames provide a profusion of natural lighting and contribute to heating by solarization in winter. Protected and open, they create precious air currents that contribute to summer comfort. The two geese crib is inspired by two typologies of a local vernacular, coated pavilions on one side, agricultural sheds on the other. 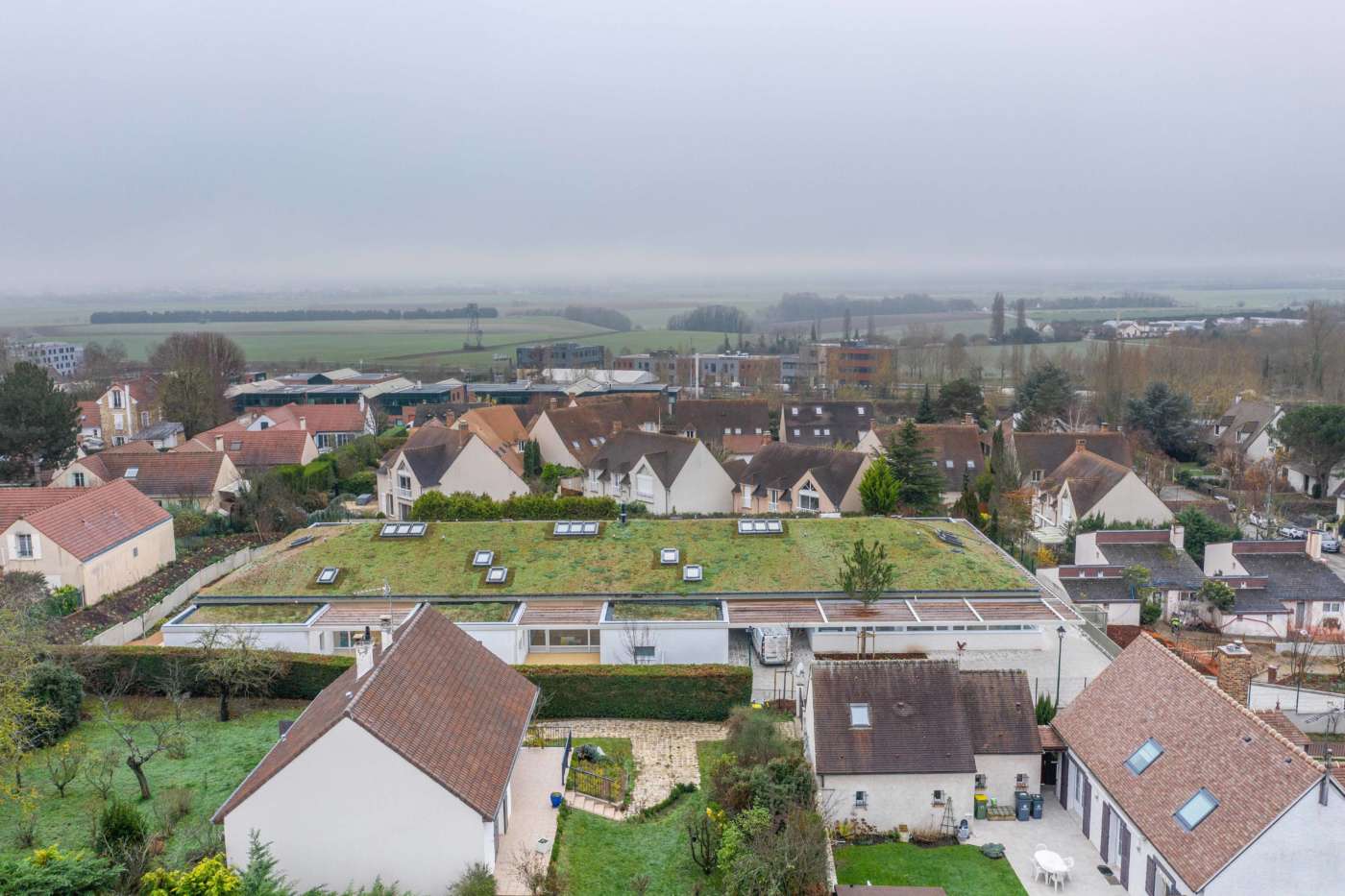