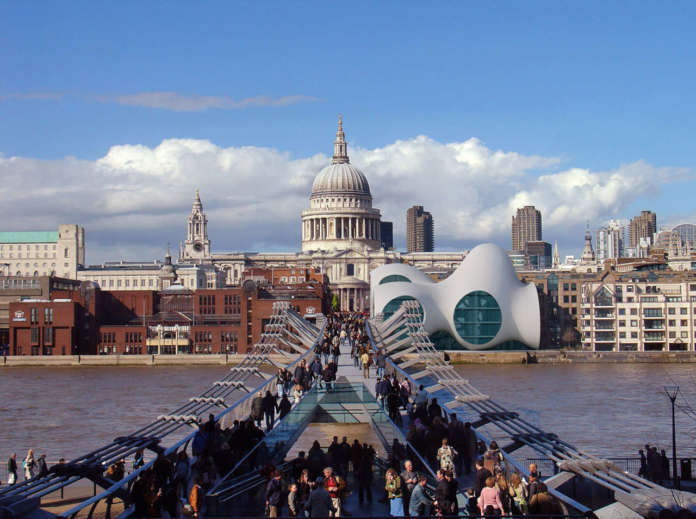 Nowadays, the financial globalization connects the economies of all the nations worldwide, and due to this a river of money flows from one continent to another. A large amount of this money, owned by the international private corporations, is poured into the business of the world capital cities, causing the modern urban transformations of these cities. Thanks to this money, in the cities skyscrapers, business centers, shopping centers and buildings of every kind are being built with a view to brutal building speculation that often erases the historical character and soul of these cities. Because of this today's phenomenon all the contemporary cities, from East to West, are homologated according to the form of enormous anonymous suburbs, all the same.

The Italian architect Saverio Adriano Marchisciana, provocatively proposes a fantasy project set in the center of London which emphasizes the fundamentals of the historical architecture within the city. This project, opened to the citizens, also plays a vital socio-cultural role. The location chosen for this project is between the Thames district and the Millennium Bridge, very close to the Tate Modern Museum, the Globe Theatre and Saint Paul's Cathedral. The proposed building, due to its unique shape, differs greatly from the neighboring buildings, infact with its undulating roof seeks a poetic dialogue with the dome of the majestic Cathedral of St. Paul.
1 of 4

This ideal project is thought to be as a welcoming space, a place where everyone can cultivate their own artistic creativity and enjoy the all entertaining activities. The building consists of four floors all dedicated to Art, Knowledge and Leisure. In this collective place visitors will pursue their passion for Art: creating sculpture and painting works, attending workshops on different topics. In this building there is an auditorium entirely dedicated to the performative arts such as dance and drama. In order to enrich the cultural offer, this building contains a spiral-shaped library as well, where the visitors can enter and read a book. The wavy terrace is meant to be as a "square" on the roofs of London, in here people will freely play, relax or simply look at the beauty of the capital of the United Kingdom.