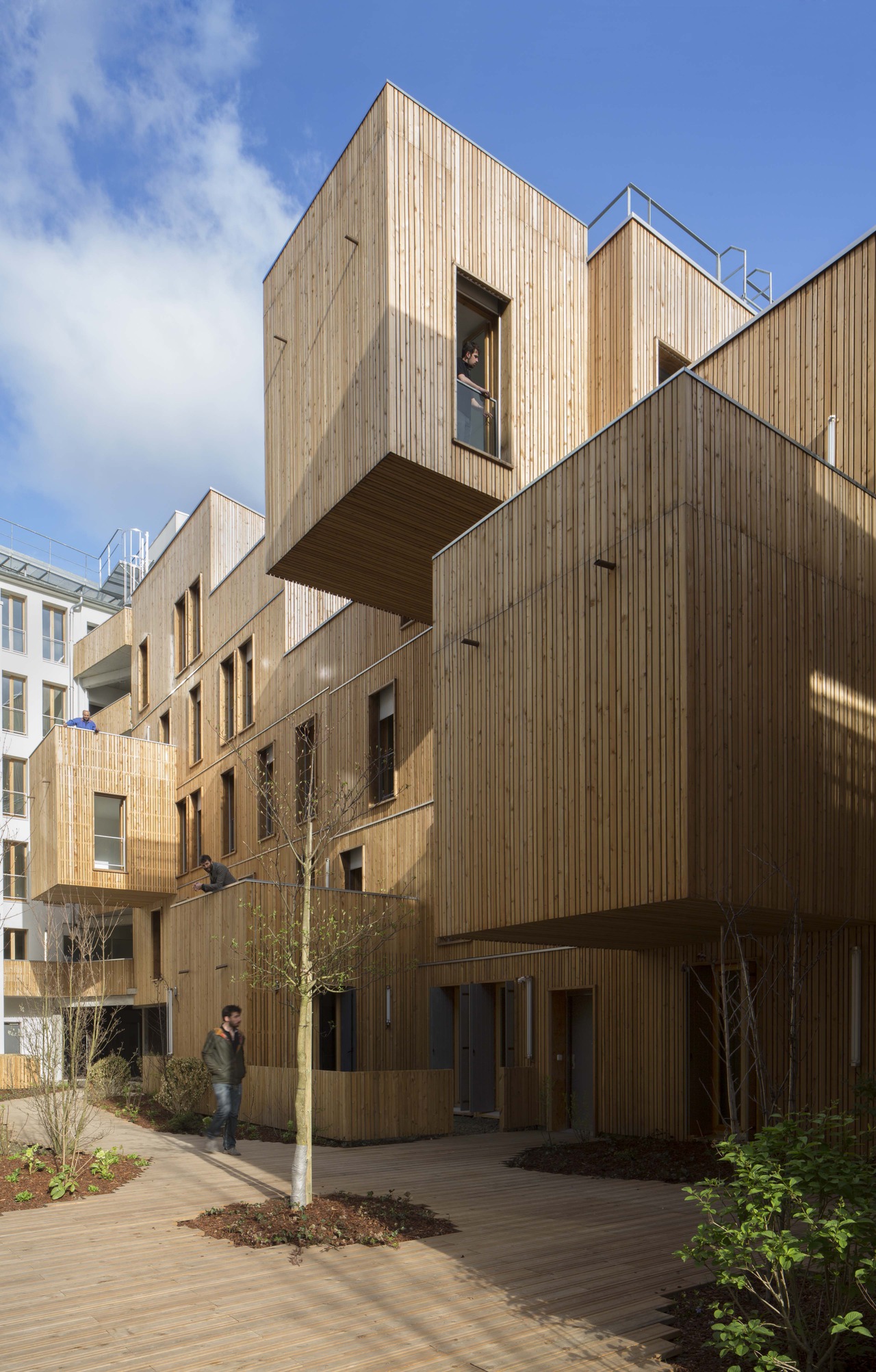 In the heart of the multi-cultural Paris, while strolling through the windows of the suburban area of La Chapelle, amongst the incense perfumes, the colour explosion of the traditional indian clothes and the different smells of the Pakistani foods, it is possible to come across one of the most interesting refurbishment projects of the city. Next to deep and narrow Rue Philippe de Girard there is the Tête en l’air (literally “head in the air”): a residential complex for social housing commissioned by SIEMP, a social housing property developer. The design was awarded to the Parisian practice KOZ architects, lead by the founding partners Nicolas Ziesel and Christophe Ouhayoun, with the objective to restore the existing building and extending it with a new structure capable of including 30 new residential units (15 in the existing building and the same number in the new extension).

Even if at a first glance the construction may look more like an ancient fortress than a residential complex, the project, built in 2010 and completed two years later, includes many innovative architectural solutions. The objective of the designers was to use the social spirit already intensively rooted in the area while restoring the picturesque nature of the main building aligned with the road. The new construction, arranged perpendicularly to the existing structure, is connected to this one via a wide garden opening towards the south direction and conceived like the central heart of the project, capable of attracting the social activities of the area and to create an intermediate filter between the road and the privacy of the apartments. All the living areas of the apartments on the ground floor have got direct access to the garden which becomes a sort of natural connection capable of bringing together the different volumes. The main existing building has been entirely re-thought in its internal lay-out while maintaining unchanged the elevation over the road in order to contain new apartments to match the highest living standards. A double height loggia along the main axis now connects the road with the internal courtyard, allowing both the view from the outside and the access to site vehicles during the construction phases.

The main feature of the entire project is the extensive use of wood for the creation of the new volumes, from the structural frame to the external cladding (made of vertically laid larch wood strips). Wood as construction material is still relatively less used in the construction of multi-storey buildings; this has required the overcoming on one side of a series of regulatory obstacles and on the other of the common construction techniques typically focused on the use of reinforced concrete. Thanks to an innovative structural system it has been possible to optimise the masses of the various elements (beams, mullions, panels etc) all made of wood and laminated plywood (LVL) and to achieve a good level of overall energy efficiency. The constant rhythm of the structural and the modularity of the construction system have been interrupted by the introduction of projecting wooden cubic randomly arranged to animate the facades overlooking the internal courtyard. These volumes, used as bedrooms or sometimes as spaces for fitness or studying, not only extend the internal spaces but also diversify the residential units with their different position.

At the ground floor of the north elevation there are small private gardens capable to shape the volume of the extension in order to allow the natural lighting for the bathrooms and to improve the visual comfort of the living areas. In contrast with the existing building, the extension is characterised by a strongly modelled volume, with a profile which varies from a minimum of three to a maximum of five floors above ground. The flat roof is composed of walkable sections interrupted by green areas which are not accessible; in addition to containing the photovoltaic modules for electricity production, the roof has been designed to include laundry areas while minimising the negative visual impact on the facade which is typical for this type of residential complex.